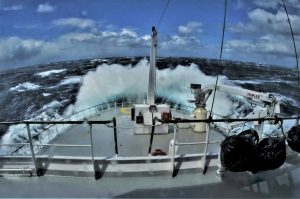 Dublin & Galway, 7 June 2017: Acknowledging World Oceans Day (8 June), the Marine Institute has announced a line-up of global thought leaders to discuss a blue economy agenda that reflects the opportunities arising from our oceans, and the need to address a range of environmental, economic and societal issues. The 2017 Our Ocean Wealth Summit, which will take place on Friday, 30 June at National University of Ireland, Galway, will focus on the theme of ‘Rethinking Boundaries and Innovation for a Sustainable Marine Economy’.

Ireland’s position in the global marine sector is being acknowledged by the calibre of speakers from the USA, Canada and Europe, who combined will provide for impactful, forward-thinking, sustainable strategies for Ireland’s blue economy at this year’s Our Ocean Wealth Summit.

Author, innovator and father of ‘design thinking’ Tom Kelley of IDEO is travelling from the West Coast to address the Summit on the challenges facing marine development against a backdrop of blue economy opportunity.  Having designed Apple’s first mouse among other innovations in Silicon Valley, IDEO now redesigns corporate cultures to drive innovation.  This keynote at the Our Ocean Wealth Summit reflects the ambition for the event, and will lead the way for speakers from The Maritime Alliance, GEOMAR, PwC, Statoil as well as national speakers and panellists including economist David McWilliams, Bord Bia CEO Tara McCarthy and Failte Ireland’s Head of the Wild Atlantic Way Programme, Fiona Monaghan among others.

“Our ocean is a national asset and supports a diverse economy,” Dr Heffernan said. “There are many success stories from businesses, from a range of sectors, about how they have responded to the opportunities provided by the ocean. To enable our marine potential to be realised, it is essential that we seek new approaches and ways of thinking to harness the boundless opportunities that exist in our marine industry.

“At this year’s summit, delegates will be inspired by those leading the way in driving innovation to continue developing a sustainable marine economy for Ireland,” Dr Heffernan said.

The success of the US ‘blue tech’ cluster will provide insights for the Irish marine sector, with a keynote address by Greg Murphy, Executive Director of the Maritime Alliance.  Terry Garcia, principal at Exploration Ventures LLC and former Chief Science & Exploration Officer at National Geographic, will lead discussions on the overwhelming and urgent imperative to innovate arising from our changing oceans.

Bringing Ireland’s blue economy into focus, Dan O’Brien, Chief Economist for Institute of International and European Affairs is addressing a number of topics from the Irish seafood sector, sustainability and economic development in coastal regions.  The impact of the Wild Atlantic Way will showcase the impact of the experiential tourism programme on coastal communities and rural economic development.

Moderated by accomplished broadcaster and journalist, Olivia O’Leary, this year’s Our Ocean Wealth Summit provides a unique platform for global and national leaders from across the marine industry and related sectors to convene and collaborate on innovating for our marine future. PwC, Ireland’s largest  professional services firm, have been confirmed as headline sponsorship of the Our Ocean Wealth Summit for the next three years.

A key aspect of the summit is to announce progress updates on Ireland’s Integrated Marine Plan, Harnessing Our Ocean Wealth –an initiative of the inter-departmental Marine Coordination Group.

A number of related marine industry and research events will alsobe held on Thursday 29 and Friday 30 June 2017, including the Digital Ocean Conference and the Marine Trade Show. Our Ocean Wealth Summit and related events are held as part of SeaFest 2017, Ireland’s national maritime festival, from 30 June to 2 July 2017 in Galway.

For the full Our Ocean Wealth Summit programme and to register visit www.ouroceanwealth.ie/register

Caption: Celebrating World Oceans Day, the Marine Institute has announced a line up of global thought leaders and expert speakers for the 2017 Our Ocean Wealth Summit at NUIG on 30 June 2017. This image (all) were taken on a recent GO-SHIP Survey, which is and Irish-led international survey carrying out a ‘health check’ of the Atlantic Ocean on the national research vessel, RV Celtic Explorer, between St. John’s Newfoundland and Galway this April-May 17. Photo by Tomasz Szumski, Marine Institute.