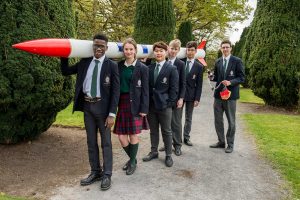 Following 2 days of strong competition in the CanSat Ireland National Finals, students from St. Columba’s College in Dublin won the coveted national title and will represent Ireland at the 2017 European CanSat Finals, to be held at the Applied Space Technology and Microgravity (ZARM) at Bremen University, Germany from 28 June to 2 July 2017.

The CanSat Ireland competition is a joint collaboration between ESERO Ireland and the CEIA and is co-funded by the European Space Agency and Science Foundation Ireland.

A CanSat is a simulation of a real satellite developed in the size and shape of a soft drink can.  A European Space Agency initiative, CanSat is designed to inspire young people to pursue a career in the STEM (science, technology, engineering and mathematics) with the ultimate goal of ensuring the availability of a highly qualified workforce in the space industry of the future.

In recent months, regional competitions have taken place across Ireland, in partnership with the Institutes of Technology in Athlone, Cork, Dublin, Galway, Limerick and Sligo.

“ESERO Ireland’s aim, with the assistance of the European Space Agency, is to foster the skills that are required by companies operating in the space sector at an early age. Irish teams have now enjoyed  success at the European CanSat competition over a number of years, tackling complex design, engineering and mathematical challenges as well as the softer skills of teamwork, problem solving and communicating with the support of their mentors all the while gaining exposure to the exciting opportunities which a career in space science can offer.  I would like to congratulate the team from St. Columba’s College on their great achievement and wish them every success as they go on to represent Ireland at the European CanSat Competition this summer. ”

“CanSat is a unique space project that simulates a real satellite which fits into the volume of a soft drinks can – students get first-hand practical experience of a real space project.  By encouraging and exciting transition year students about the possibilities of a career in space and STEM, this initiative is not only effective but great fun for students, and we look forward to seeing more entries across the country each year,” said Dr. Eamon Connolly, Electrical and Electronic Engineering Promotion Officer,CEIA – Cork’s Technology Network.

Sixteen teams will participate in the 2017 European CanSatFinals, which will be held at ZARM in partnership with the University of Bremen from 28 June to 2 July 2017.  There will be 14 winners of CanSat National competitions from Belgium, Czech Republic, Denmark, Germany, Greece, Ireland, Italy, Portugal, Poland, Romania, the Netherlands, Spain, UK and Nordic countries as well as an additional two teams coming from countries without a national competition but selected by ESA.

Industry Sponsors of the CanSat Competition are Limerick Based Arralis, and Dublin based Xilinx Ireland as well as Industry Cluster Group MIDAS Ireland.  Speaking on behalf of Xilinx Ireland and MIDAS Ireland, Peng Lim said “Xilinx and Midas Ireland are delighted to support this exciting competition which has all the right ingredients – Hardware Design, Software Design, Systems design and Team Work to shape our next generation Engineers.”

Caption: Following 2 days of strong competition in the CanSatIreland National Finals, transition year students from St Columba’s College, Dublin won the coveted national title and will represent Ireland at the 2017 European CanSat Finals, to be held at the Applied Space Technology and Microgravity (ZARM) at Bremen University, Germany from 28 June to 2 July 2017. Pictured with the rocket that launched their winning CanSat (Satellite in a Soft Drink can) are Harry Oke Osanyintolu, Caroline Neincke, Ji Woo Park, William Zipman, Leonard Lopez and Ted Johnson